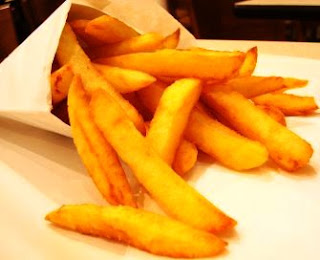 Freedom fries, chips, or frites---whatever you choose to call them, they're Belgian in origin, not French! And, believe it, Belgians take their fries very seriously. Made with Belgian Bintje potatoes, cooked twice and served in a paper cone with a side of mayonnaise, these Belgian treats embody potato perfection. A favorite place to sample fries in Belgium is at frietkots or fritures (outdoor vendors who sell---you guessed it---Belgian fries). You'll find more than 4000 frietkots throughout Belgium and many carry a selection of over 50 dipping sauces to choose from. One of the most visited frietkots in Brussels is a local favorite, Antoine's, on the Place Jourdan. Whether enjoyed at a three star Michelin restaurant or right off the street, this Belgian specialty is not to be missed.

And why are they called "French" Fries? Apparently the name originated due to a linguistic misunderstanding, because in old English 'to French' meant to 'cut into sticks.' According to the Belgian historian Jo Gerard, chips appeared on the dining tables in Namur, French speaking Ardennes, and Dinant in the latter half of the 17th century. Poorer inhabitants in these towns used to fry tiny fish. When the river froze in the winter the fish were replaced by sticks of potatoes cut to the same small size of the fish, et voila! Belgian Fries were born.