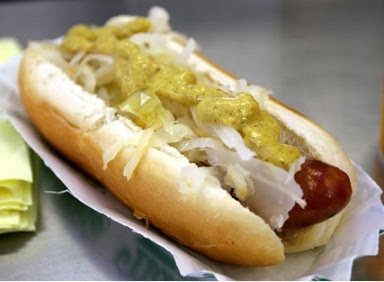 Personally, I love 'em. Whenever I'm in New York City, one of the first things I do is search out a Nathan's hot dog stand. I smother my prize with sauerkraut and mustard, and then I savor it slowly. Well, maybe not all that slowly. At home I keep Hebrew National low-fat dogs in the freezer. I don't eat one often---maybe once a month, for lunch, tucked not between a white foam bun but between a slice of 100% whole wheat bread.

The thing is, I've been aware for a long time of the dangers involved with processed meats treated with preservatives like nitrate and nitrite, so I've mostly stayed away from products that use them. A long-term low-fat diet means that this hasn't been much of a struggle (it's been years, for example, since I kept bacon around). But I do like the occasional dog, I must admit...

Three New Jersey residents are suing the country's major hot dog makers---Nathan’s Famous, Kraft Foods (Oscar Mayer), Sara Lee (Ball Park), Con Agra Foods (Hebrew National), and Marathon Enterprises (Sabrett)---for failing to warn consumers that hot dogs increase the danger of colorectal cancer. The action comes in the wake of landmark scientific studies linking hot dogs and similar meats to colon cancer.
The class-action consumer fraud lawsuit, which was filed July 22 in Superior Court in Essex County, seeks to compel all five companies to place cancer-risk warning labels on hot dog packages sold in New Jersey. The labels would read "Warning: Consuming hot dogs and other processed meats increases the risk of cancer."
The nonprofit Cancer Project is filing the suit on behalf of John O’Donnell, Ruthann Hilland, and Michele DeScisciolo, who purchased hot dogs made by the companies without being made aware that processed meat products are a cause of colorectal cancer.
"Just as tobacco causes lung cancer, processed meats are linked to colon cancer," says Neal Barnard, M.D., president of the Cancer Project. "Companies that sell hot dogs are well aware of the danger, and their customers deserve the same information."
The lawsuit stems from the findings of a landmark report from the American Institute for Cancer Research, based on 58 separate scientific studies, showing that just one 50-gram serving of processed meat (about the amount in one hot dog) consumed daily increases the risk of colorectal cancer, on average, by 21 percent. Every year, about 150,000 Americans are diagnosed with colorectal cancer; approximately 50,000 die of it.
In March, the National Cancer Institute published a study of more than half a million people showing that red and processed meat intake is associated with a higher risk of dying from cancer and cardiovascular disease.