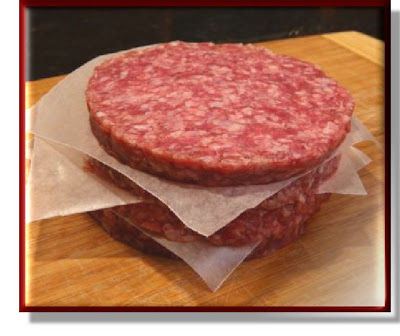 If you buy frozen ground beef patties, or regularly consume fast-food burgers, you must read "E. Coli Path Shows Flaws in Beef Inspection." The article appeared in yesterday's New York Times, and its revelations about the the fast-and-loose manner in which many meat processing plants play with our health are nothing short of shocking.

Author Michael Moss introduces the piece by telling the story of Stephanie Smith. A children's dance instructor, she was 20 years old in 2007 when she ate a hamburger grilled by her mother. The patty was part of a batch of frozen burgers made by food producer Cargill and labeled "American Chefs Selection Angus Beef Patties." Stephanie contracted E. coli (O157:H7) from the burger, developed seizures, and entered a 9-week coma. Ultimately, as a direct result of eating the burger, she became paralyzed from the waist down. She will probably never walk again.

The label of the contaminated burgers specify Angus Beef Patties, but as Moss makes clear in his article:


"Yet confidential grinding logs and other Cargill records show that the hamburgers were made from a mix of slaughterhouse trimmings and a mash-like product derived from scraps that were ground together at a plant in Wisconsin. The ingredients came from slaughterhouses in Nebraska, Texas and Uruguay, and from a South Dakota company that processes fatty trimmings and treats them with ammonia to kill bacteria."

Moss traces the various routes of the meat, fat, and trimmings that comprise the burger, discussing the lack of inspection along the away. It's an infuriating eye-opener about a system that's supposed to protect the American consumer but---what else is new?---has fallen down on the job. Badly.

I read this long feature in the NYTimes and, even tho' I know that hamburger can be dicey, I was shocked to read about the horrible ingredients and lack of regulation/monitoring of production. Thanks Culinary Gadabout for helping to publicize this very important info.