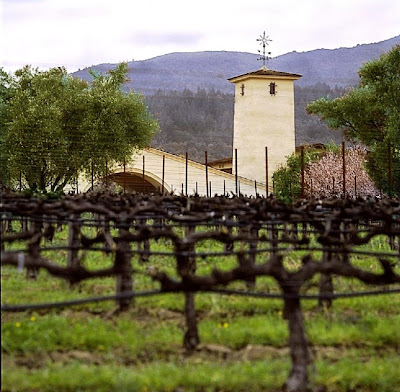 
One day earlier this month I turned off Highway 29 and headed down the long drive toward Robert Mondavi Winery. It was late morning, a crisp and cool day, and well into the autumnal harvest and crush. Before me the earth-toned winery, which resembles one of California's ancient missions, melded beautifully with the landscape; beyond, the extensive Mondavi vineyards stretched north and south, backdropped by the rising hills on the Valley's western side.

Even though Mondavi is one of my favorite Napa destinations, I hadn't been there in ages. As a travel, culinary, and wine writer living in wine country, it seems there is always something new that I need to check out: a winery resembling an ancient Persian capital (Danioush Winery), a stunning vegetarian restaurant (Ubuntu), the latest martini on the Martini House menu. By necessity, old faves often get pushed to the back burner. Over the last couple of years I'd driven past Mondavi countless times, thinking: "You need to visit again." Now, thanks to an invite from the winery, I was joining a few other writers for a tour, followed by lunch with VP of Cultural Affairs Margrit Mondavi.

Unless you're a vinophile, you may not realize the impact this particular winery and its founder have had---not just in Napa Valley but across the entire world of wine. Established in 1966 by Robert Mondavi, it was the first large-scale winery built in the Valley since pre-prohibition. Mondavi knew what he was doing: the son of a winemaker, he'd been involved in the making and business of wine all his life. Before long, the new Mondavi winery gained worldwide recognition for the excellence of its wines. In Mondavi's wake a new generation of winemakers began moving into the Valley.

Napa Valley was much different in 1966 than it is now. Prohibition and the Depression had killed off much of the once-prosperous wine industry, and the area had become something of a backwater. I've talked to people who grew up in the 1950s and 1960s in the Napa town of Yountville, which they describe as being, then, an extremely poor farming community. Today Yountville is one luxurious town, home to some of the finest resorts and best eateries in Northern California. It's also where you'll find the three-star French Laundry, considered by many to be the best restaurant in the world.

Although there had been a slow-but-steady re-emergence of Napa winemaking after World War II, there weren't really that many wineries in the Valley in the 1960s. I once heard Jack Cakebread talk about the first couple of years he and his wife, Dolores, spent on their land back in the very early 1970s, establishing the highly-successful Cakebread Cellars. There was so little traffic on Highway 29---now a busy, busy road---that when they heard a car coming they'd peer out the window to see who it was.

At any rate, in Napa and even in the much larger world of wine Robert Mondavi is invariably credited with kicking off and then guiding Napa Valley into the pre-eminent position it holds in today's world. When Mondavi died in 2008, the Wine Spectator called him a "visionary winemaker and brilliant marketer" who was:
"One of the most influential and admired winemakers in California history...His name, influence and passion for wine and life spread well beyond Napa and California. Winemakers around the world credited Mondavi with encouraging them to set higher standards and make better wines...Mondavi's love of wine spilled over into what he termed a gracious way of living. He showed a deep appreciation for music and the arts, and he embraced fine cuisines of the world and elegant dining, in which food and wine enhanced each other. As Mondavi's reputation grew, the stylish Mondavi winery became a mecca for visitors to Napa. Its educational tours and tastings, art shows and summer concert series became a focal point for many tourists."
As I parked and headed toward the winery, I was curious to see how the great Mondavi legacy had held up in the year since his death.

Tomorrow: Part 2 of my visit to Robert Mondavi Winery


Harvests of Joy by Robert Mondavi

From Publisher's Weekly: In 1965, Mondavi and his brother were doing well running the Charles Krug Winery, which his family had bought some 20 years before. He was 52, hardly the age to start grand schemes such as an entirely new winery; and by his own admission, he's something of a monomaniac, which obviously helped him to establish Robert Mondavi Vineyards, a powerful and revolutionary force in the American wine industry. This book is a fascinating blend of autobiography and the story of how a nascent winery became a formidable challenger to the greatest names in wine making the world over. It assuredly has a place in the Mondavi marketing strategy of educating potential customers about wine. Mondavi also fashions himself a homespun Peter Drucker, dispensing advice on achieving excellence and management success. Despite occasional efforts to acknowledge his overpowering ego, Mondavi is portrayed as a thoroughly driven, egocentric individual who has destroyed much on his road to success. Yet the descriptions of his parents and their immigrant life, the transformation of Napa Valley from sleepy backwater to tourist and boutique winery haven, his relations with many celebrated names in wine and the insider track on 50 years of the American wine business are well worth reading. Buy Harvests of Joy: How the Good Life Became Great Business 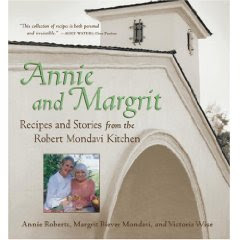 From the Publisher: The wines of the Robert Mondavi Winery are acclaimed the world over. Less well known is the fact that the winery features a private dining room to rival the best restaurants in the Napa Valley. Here in the Vineyard Room, innovative chef Annie Roberts brings a refined sense of taste and balance to her creations, always designed with the perfect wine in mind. The winery is also home to elegant music and art events, all planned to perfection by Annie’s mother, Margrit. And so a mother and daughter come together to deliver a wine country experience like no other. In Annie and Margrit, renowned cookbook author Victoria Wise shares behind-the-scenes stories of Annie and Margrit’s collaboration over time, along with Annie’s fabulous recipes, reflecting treasures and traditions from her mother’s cooking and influences from life in the Napa Valley. From the start, Margrit and Annie cooked with one another, Annie learning at Margrit’s stove. Years later, Annie became the first executive chef of a winery in the Napa Valley, and developed a repertoire including Squab with Cabernet Sauvignon–Onion Marmalade and Spatzli; Salmon Fillets with Whole Grain Mustard Beurre Blanc; Poussins with Swiss Chard Gratin; and Fresh Plum Galette. Annie and Margrit takes you inside the Mondavi experience, evoking the tastes, sights, and sounds of a day’s visit to the winery. Buy Annie and Margrit: Recipes and Stories from the Robert Mondavi Kitchen