Soda Pop and Pancreatic Cancer: Is There a Link? 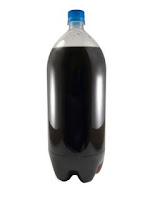 This morning, Reuter’s news agency reported the results of a new study in which regular soda drinkers had an 87% higher risk of pancreatic cancer. The theory points to sugar as the culprit in fueling tumors. Here is the Reuter’s report:


People who drink two or more sweetened soft drinks a week have a much higher risk of pancreatic cancer, an unusual but deadly cancer, researchers reported. People who drank mostly fruit juice instead of sodas did not have the same risk, the study of 60,000 people in Singapore found.

Sugar may be to blame but people who drink sweetened sodas regularly often have other poor health habits, said Mark Pereira of the University of Minnesota, who led the study. “The high levels of sugar in soft drinks may be increasing the level of insulin in the body, which we think contributes to pancreatic cancer cell growth," he said. Insulin, which helps the body metabolize sugar, is made in the pancreas.

Writing in the journal Cancer Epidemiology, Biomarkers & Prevention, Pereira and colleagues said they followed 60,524 men and women in the Singapore Chinese Health Study for 14 years. Over that time, 140 of the volunteers developed pancreatic cancer. Those who drank two or more soft drinks a week had an 87 percent higher risk of being among those who got pancreatic cancer.

Pereira said he believed the findings would apply elsewhere. "Singapore is a wealthy country with excellent healthcare. Favorite pastimes are eating and shopping, so the findings should apply to other western countries," he said.

But Susan Mayne of the Yale Cancer Center at Yale University in Connecticut was cautious. "Although this study found a risk, the finding was based on a relatively small number of cases and it remains unclear whether it is a causal association or not," said Mayne, who serves on the board of the journal, which is published by the American Association for Cancer Research. “Soft drink consumption in Singapore was associated with several other adverse health behaviors such as smoking and red meat intake, which we can't accurately control for."

Some researchers believe high sugar intake may fuel some forms of cancer, although the evidence has been contradictory. Tumor cells use more glucose than other cells.

I never developed a soft drink habit. My mother refused to buy the stuff when I was a kid, so my drink selections were confined to milk, orange juice, lemonade, and water. The result? As an adult, I never even think about soft drinks when I'm thirsty (or any other time); I opt instead on hot days for sparkling water, a real cooler-off, and just plain ol' water out of the faucet the rest of the time. I still like milk, too, both cow milk and soy milk. I'd rather have an orange than orange juice, though. And of course I drink wine, beer, and cocktails...

How about you? Do you reach for a soda when it's hot? If not, what quenches your thirst?

I suspect that soft drinks play a huge role in many of the physical ills facing Americans today, including obesity and diabetes. Thanks for the heads up about pancreatic cancer.

Thanks for the information. Soft drinks should be avoided to prevent pancreatic cancer. Pancreatic Cancer badly affects the pancreas. The symptoms of pancreatic cancer differ from person to person. The early symptoms include nausea, weight loss, jaundice, vomiting etc. There are many treatments available but diagnosis is the main part.

The problem, as I see it, is that Pancreatic Cancer goes undetected for so long because the symptoms are not easily noticable in the early stages, when it can be best be treated. The symptoms can also be confused with other medical problems, and not immediately thought of as pancreatic cancer. In my opinion, more people should be aware of it's symptoms. If there is awareness of the symptoms, it might improve survival rates. If pancreatic cancer runs in the family, and you are nearing the vulnerable age of of 50 and older (it occurs more often in people 50 and older), symptom awareness and knowing your family history and risk factors, is the key, I believe.