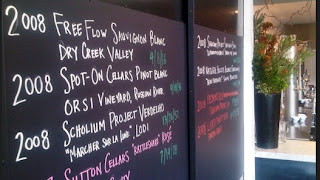 A good many press releases come my way devoted to my favorite subjects: food, wine, spirits, and/or travel. Occasionally something comes along that I find interesting or newsworthy enough to bring to your attention, but yet I don't want to turn it into the subject of an entire post. So beginning today I'll compile such items into periodic Gadabout Roundups.

Wine kegs in restaurants are  nothing new—in other parts of the world, anyway. Traveling in the French countryside I’ve sometimes been served local wines from a small barrel delivered to a restaurant by the winemaker. In fact, one of my fond memories involves being in the Beaujolais region in late November—right around the time that the Nouveau arrives in the U. S. Le propriétaire recommended a local Nouveau, and we were delighted when he dipped a pitcher into a wooden barrel on the counter and carted it to our table. It was, as he had predicted, fantastique!

In the U. S., wine in kegs is a fairly innovative concept—but one that’s becoming accepted (read this NYT article by Eric Asimov). And now a company called Silvertap has begun providing quality organic wines in tappable plastic kegs to restaurants and bars. They’re going about it in a business-like fashion, so this may really turn into something. Among many virtues, kegs do away with the cost of bottles, corks, labels, foils, and boxes, decreasing the wine cost by as much as a 30%. This by-the-glass reduction will hopefully be passed on to the consumer (call me a cynic, but I’ll take a wait-and-see approach on that). Current Silvertap wines include the 2009 Sauvignon Blanc and 2007 Merlot, both from Sonoma County. More wines will be on the list by year’s end.

A group of next-generation farmers, winemakers and other wine industry folks in California’s Russian River Valley is hosting a big celebration on June 5. Dubbed Single Night, it will take place from 6:30 to 10 p.m. at C. Donatiello Winery in the Sonoma County town of Healdsburg. The event includes tastings of small-lot Single Vineyard wines from the Valley; an auction of “adventure lots” (kayaking/clam bake on the Russian River, hot air ballooning, etc.); and dancing with music provided by DJs Franco Finn and Samantha Vegas. Get more details or a List of participating wineries

Pisco, a three-centuries-old liquor from Peru, is making big inroads in the U. S., according to its #1 exporter, Gran Sierpe Pisco. This is probably due to the growing (and nationwide) popularity of classic cocktails. With its 19th century roots, the Pisco Sour—Peru’s most well-known cocktail—fits right into this trend. Gran Sierpe saw a whopping 67.5% growth in Q1 2010 exports as compared to the same period in 2009. The company’s major growth markets included Japan (591%); Chile (236%); and the US (59%). Download a Pisco Sour recipe

FAIR Vodka is not only the world’s first vodka made with Fair Trade Certified ingredients, it’s also the world’s first vodka made with Quinoa. Worshipped as the “mother of all grains” and an excellent source of protein, Quinoa has been a staple in the diet of Peruvian Andean people for centuries. But in vodka? Apparently it works! FAIR Vodka, the first product in the premium spirits line from The Fair Trade Spirits Company, won the Gold Medal (93 points) at the November  2009 Chicago Beverage Institute and was nominated “Best Tasting Vodka 2009” at the New York Spirits Award last June.