Last week a couple of travel writer friends and I were invited to the official launch of the 2010 Philippine Food Festival, which will take place around the S. F. Bay Area all through June. Diners in the participating restaurants can take advantage of special promos. They’ll also get a chance to win prizes, including a trip to the Philippines. 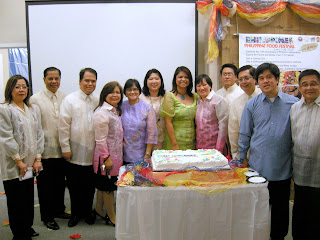 The Food Festival's Organizers at the Launch
Sponsored by the Consul General of the Philippines, last week’s launch brought together 15 of these Philippine restaurants to showcase some of the best in that nation’s diverse and multi-layered cuisine. The Philippine nation, made up of more than 7,000 islands, has seen many flags sail into its ports over the centuries...and many times the newcomers have stuck around. The cuisine has Malayo-Polynesian origins, but has thus been influenced over centuries by the techniques and ingredients of Spaniards, Portuguese, Chinese, Americans, and a great many others. In short, Philippine food is incredibly complex, offers bold flavor combinations, and is filled with surprises.

At the launch, which took place just off Union Square in the Social Hall of the Philippine Center on Sutter Street, some of that delicious complexity was on display. Long tables, arranged in a big U-shape, were covered with specialties from the 15 restaurants on hand. 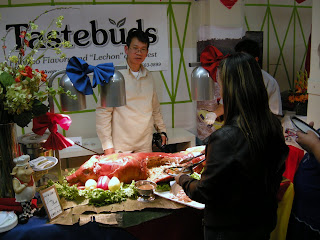 At the Launch: Tastebuds Restaurant
The beautiful display didn’t last long. After the Consulate General and assorted dignitaries did their thing, the hungry crowd went wild. I felt like a little kid let loose in a chocolate factory as I wandered around with my plate, sampling whatever seemed interesting: paella, chorizo, ceviche, roasted pig, adobo chicken skewers, pancit, lumpia, black rice…oh, that black rice! I’ve got to learn how to make that. 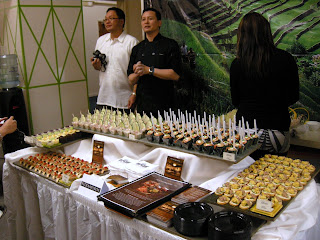 At the Launch: Intramuros
And of course I had a favorite restaurant: Intramuros. Located in South San Francisco, Intramuros features a tantalizing Filipino-Spanish cuisine with a modern twist—fusion at its best! Their food presentation at the launch was breathtaking: small, elegant, and modern containers holding black rice topped with a prawn were my favorite, although the incredible ceviche came close. A great deal of thought had been put not just into the food preparation but in the way it was arranged. Kudos to you folks at Intramuros! If any readers are curious, here’s the Menu from the restaurant.

For that matter, kudos and thanks to all who made that evening a special event. 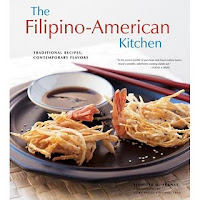 With more than 100 traditional and modern adaptations of Filipino recipes, this cookbook is perfect for Americans with little to no experience of Filipino cuisine, and for Filipino-Americans interested in learning new and easier ways to try traditional dishes. A comprehensive guide, The Filipino-American Kitchen includes a brief culinary history of the Philippines, an explanation of ingredients, a guide to navigating Asian grocery stores, and10 chapters of recipes organized by course.