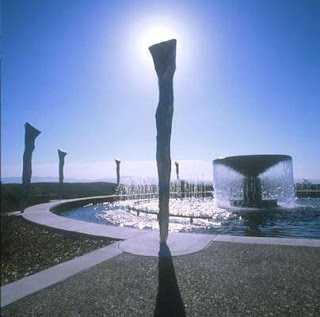 One of the reasons I like visiting Artesa so much: its bold architecture. Completed in 1991 and poised atop a high hill on a bucolic country road, you don't really see the 127,000 square-foot, pyramid-shaped winery until you've arrived. That's because the building, designed by Spanish architect Domingo Triay, is built into the top of a hill—and I mean built into. Triay thought that the gently-sloping hill was much more impressive than any building would be sitting on top of it, so his design hid the building inside the hill to keep the property's beauty intact.

The construction involved removing the first 30 feet or so of the hill and temporarily storing the soil. The environmentally-conscious winery was then built from the top floor downward into the ground (there are four floors). When completed, the stored soil was returned to its rightful place atop the hill—which by this point was also the top of the winery; the hill ended up being the same height as at the beginning, although a winery was now inside. Today the winery’s roof is covered over with native grasses. Although the large building is beneath ground, terraces, platforms, open-air patios, skylights and giant windows bring the outside in and the inside out.

To the Sky!
And yet, though much of the building is hidden from view, there is absolutely nothing shy or modest about Artesa. To the contrary. The entrance path to the winery—an incredibly broad set of stairs that appears to climb upward toward the sky and is bordered by cascading waterfalls the entire way—pauses on a landing where a huge modern fountain is surrounded by sculptured thrusts of aluminum. And upward a few stairs from that is a terrace offering a 360° vista of the Carneros, the Bay beyond, and San Francisco beyond that. 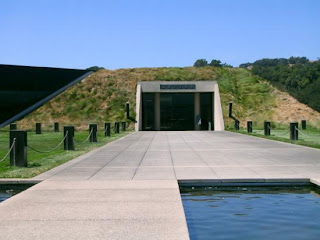 Main entrance to Artesa   (Courtesy Artesa Winery)
And then, finally, after all of this prelude, you walk into the winery, which is open, airy, modernistic and minimal. Art is everywhere, most of it created by resident artist Gordon Heuther, who works in various media including metal sculpture and painting. It's his upward-thrusting sculpture that surrounds the main fountain.

And I haven’t even told you about the wine yet…

Fifth-generation Napa winemaker Mark Beringer joined Artesa in 2009 after an illustrious 16-year stint with Duckhorn Vineyards. As Artesa’s Vice President of Production and Winemaking, he has been charged with returning Artesa’s primary focus to “the jewels of the Carneros”—Chardonnay and Pinot Noir. His winemaking style is geared to letting the terroir speak for itself. To do that, he employs--along with intuition--small-lot production, low-manipulation techniques (e.g., gravity flow, gentle pressing), and constant experimentation. Winemaker Mark Beringer leading the tasting   (Credit: Suzie Rodriguez)
The barrel samples offered tantalizing hints of what’s to come under Beringer. We tried the Block 921 2009 Estate Reserve Chardonnay; It was still on the lees and thus a little hazy; since I'm a fan of unfiltered wine, I'm not fazed by haze. The wine possessed a decided hint of citrus and loads of bright fruit flavor. The 2009 Estate Vineyards Pinot, Block 91-D, was intensely fruit-driven, with a nicely developing spice.

We also tasted bottled 2007 and 2008 Chardonnays and Pinots. Excellent wines all, but for me the standout among the bottles was the 2007 Pinot Noir Carneros Estate Vineyard. Intensely berry/cherry/touch-of-floral aroma; rich and supple; great structure. Yeah, I liked it!

Later, over lunch, we were served an amazingly good wine with dessert—the 2008 Pinot Rosé, Carneros. Not a hint of sweetness, yet it was the perfect complement to the Bing Cherry Crisp topped with Blackberry Cabernet Sorbet and Berry Mignardises. Sipping it, I "deja-vued" about one of my first trips to France years ago. In those days, rosé wine in the US, even in California, was sweet. I hated it. But somewhere in Provence one summer someone talked me into trying a French rosé. Dry, crisp and something of a tease, it was a revelation. 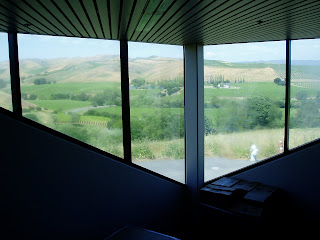 From Within Looking Out  (Credit: Suzie Rodriguez)
Artesa is open daily from 10 to 5. The tasting room terrace is wildly popular on weekends, what with the comfortable seating and a view stretching forever…or at least all the way to San Francisco. So if you don't like crowds, try visiting during the week. No appointment needed for basic tastings. However, for tours or more elaborate tastings—for example, the Food & Wine Pairing in which the resident chef pairs nine tastes with single-vineyard or limited-release wines—you’ll need to make advance reservations. 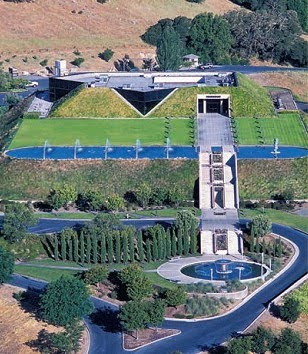