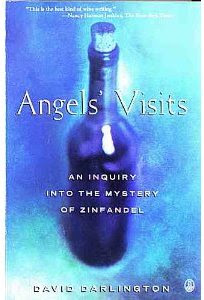 At a $1 library sale recently, a friend came across a book he thought I might like, Angels’ Visits: An Inquiry into the Mystery of Zinfandel (by David Darlington; Henry Holt 1991). I was a bit puzzled when it arrived in the mail. I like Zinfandel—quite a lot, actually—but I didn’t see how its mysteries, whatever they might be, could sustain an entire book.

And once again: was I ever wrong!

Angels Visits is hung on a loose framework of Darlington’s experiences when he delved into research about all things Zinfandel, from the grape’s possible origins to its most celebrated winemakers (many of whom he interviews and hangs with).

But the book is about so much more than that, and not all of it is wine-related. It’s about people who take risks or seize the main chance—or both. It’s about the passions that drive us to perfection. It delves into ancient history, tracing wine’s path from the crudely-fermented grape juice of millennia ago to the pricey nectars of our own time. There’s a whole chapter analyzing the philosophical differences between being a Dionysian or Apollonian wine stylist. I was particularly fascinated by the writings about Count Agoston Haraszthy, the oft-called “Father of the California wine industry,” who most likely brought the first Zinfandel grapes to California and planted them.

But by far the most important parts of this book deal with the winemakers, each with his own (and all the winemakers in this book are men) particular brand of obsession. Darlington saw most of these men many times, and he captures them warts and all. He pays closest attention and gives most space to Zin-maven Joel Peterson of Ravenswood Winery and Paul Draper of Ridge Vineyards (Ridge’s first winemaker, Dave Bennion, also gets a good bit of space). Darlington focused on them because both were (and still are) producing award-winning Zins with opposing styles: big and brash and gorgeous on Peterson’s side, austere and elegant on the part of Draper. We see both men out in the vineyards, kicking back over a good meal, interacting with their staffs. We learn a lot about how they make wine.

I really liked Darlington’s writing style: straightforward and journalistic with lots of humorous touches and observations. Every once in a while he’d become downright lyrical. One night, home alone, he fixes a steak and opens up a bottle of wine:


It was the ‘84 Ridge Geyserville, a wine that I, having been unmoved by recent Ridge offerings, anticipated without much in the way of expectation. Therefore imagine my surprise when I poured a small amount into a glass, swirled, sniffed, and was riveted by a rich, briary nose brimming with black cherries, roasted chocolate, and toasty oak. Immediately upon sipping the wine, I recognized what was meant by the “rich claret” style I’d heard so much about. The wine was full but not overpowering, sensuous but not too fleshy, oaky but not overly tannic. Its complexities were  held together in perfect balance—so perfect, in fact, that balance itself was the wine’s major hallmark. It was Zinfandel, to be sure, but its main distinction lay in the fact that it was also something greater.

I liked this book so much that I want to pass it on to a Zinfandel lover. Tomorrow I’ll tell you how you can win my copy, so stay tuned!

Oh, and Zin's mysteries? There are so many! But here's one: nobody really knows for sure how and when the Zinfandel grape arrived in California. But no matter when it got here, there is no denying that it is now, in the eyes of the entire world, California's grape.