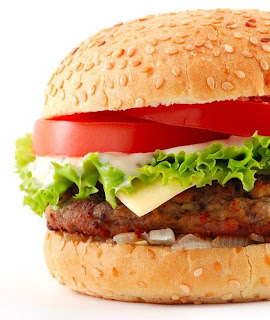 The All-American Burger
What could be more American than a hamburger? While chopped beef patties had been known in Europe for years, it wasn't until the late 1800s—in the USA—that someone came up with the idea of slipping a beef patty between a bun and adding a topping or two. Over the years burgers have become one of the country's favorite foods. It's a sure bet that, on the average Fourth of July, millions of  hamburgers are tossed onto backyard grills across the nation.

These days, of course, just about anything can be grilled and transformed into a burger: veggies, fish steaks or filets, and a wide variety of ground  meats (including turkey, lamb, pork, beef, and probably others I'm forgetting). To get some great burger ideas, take a look at Mark Bittman's suggestions in today's New York Times. His eight burger recipes include Greek Salad Burgers, Asian Burgers, Philly Cheesesteak Burgers, and a blue cheese riff on the old-fashioned Beef Burger.

No matter the main ingredient, though, the importance of toppings is paramount. While once the options were simple—Swiss or Cheddar? Grilled onions? Mayo on the side?—today's only limitation to what constitutes a burger topping is imagination.

So I'm happy to tell you about the best roundup of burger toppings I've seen yet, which appeared in the July 1 Pittsburgh Post-Gazette. In a topping tour de force, Gretchen McKay not only lists 26 burger toppings (alphabetically, from A to Z), she gives recipes for all of them! Most of them sound luscious, too, like "S" (Sun-dried Tomato Chimichurri), "F" (Fennel and Jicama Slaw), and "Z" (Zesty Chipotle-Infused BBQ Sauce). Check out the article.

And no matter what you choose to eat today, have a happy Fourth of July!