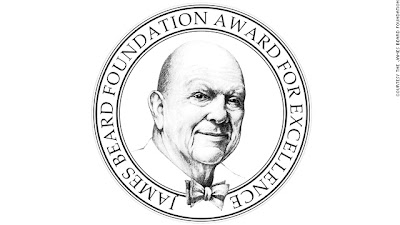 Last night the annual James Beard Awards—known as “the Oscars of the food world”—were handed out in New York City’s Avery Fisher Hall. This prestigious award carries no monetary prize, but it's hard to think of a greater honor in the culinary/beverage world.

This year I took particular interest in winners and nominees from my part of the planet--San Francisco, Napa Valley, and Sonoma. I'll list those, with their designations, below. Except for Michael Tusk, winner in the category of Best Chef in the Pacific Region, those below were all among the 5 nominees in their category. But being nominated for a James Beard Award is akin to being an Oscar nominee--it's a huge honor just to be nominated.

To learn more about the awards and the other category winners, visit the James Beard Foundation website. or download a PDF of the winners.

The 2011 James Beard Award winners and nominees from San Francisco, Napa Valley, and Sonoma are:

Email ThisBlogThis!Share to TwitterShare to FacebookShare to Pinterest
Labels: Contests and Awards