Some interesting facts about food and sex to liven your dinner conversation:

1. According to a 2010 study, food odors can influence sexual arousal in both men and women. Researchers at Chicago’s Smell & Taste Treatment and Research Foundation found that the combined odor of lavender and pumpkin pie increased penile blood flow by an average 40% (penile blood flow affects the ability to get and maintain an erection). The next most effective odor was another combination, black licorice and doughnut (31.5%). At the bottom of the heap was cranberry, with only a 2% increase. Read the study results here.

For women, the highest increase in vaginal blood flow (13%) came from the combination of cucumber and the licorice candy Good & Plenty.

2. Many ancient cultures considered the apple to be a feminine symbol, probably because the two halves of a vertically-cut apple resemble female genitalia.

3. In ancient Hawaii, women were forbidden under pain of death from eating the banana, which probably had something to do with its phallic shape. Ironically, despite the banana's suggestive shape, a banana tree is sterile: no fertilization takes place with banana flowers.

4. Some cultural anthropologists believe that kissing may have originated when early human mothers orally passed chewed solid food to their infants during weaning.

5. Some foods are thought to have sexual powers because they resemble human genitals. Casanova was said to offer oysters to his potential partners to whet their sexual appetite. In many cultures, the fig is considered a fertility symbol.

Along those lines, here's a fun cookbook that may interest you: 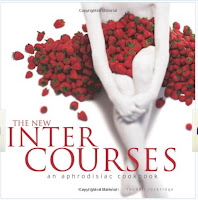 The New InterCourses: An Aphrodisiac Cookbook: From the Amazon review: "If you want to get your lover in the mood, look no farther than your local supermarket. Strawberries, chocolate, asparagus--even coffee--have long been considered stimulants for the romantic appetite. For centuries, folk wisdom held that foods either rare or resembling a sexual organ had tremendous power over the libido. Modern science has since debunked that theory, but there's no denying that a meal lovingly prepared and properly presented with just the right ambience can precipitate the most passionate encounters." About $18. Learn more about or buy The New InterCourses.