Seafood Fraud: What you need to know 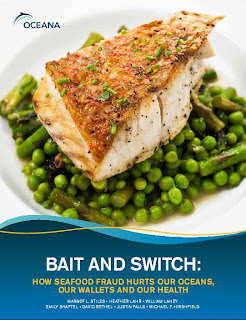 Oceana, the largest international advocacy group working solely to protect the world’s oceans, has released a report about seafood fraud, which boils down to misleading consumers about the seafood they're buying in order to increase profits. Aside from ripping off shoppers, seafood fraud can also have negative impacts on marine conservation efforts and human health.

One type of seafood fraud involves substituting one species for another without changing the label. Other types include:
In the U. S., consumers are routinely given little or no information about where their seafood is from. Plus, the information provided on seafood labels is often misleading or fraudulent. Consumers are frequently served the wrong fish – a completely different species than the one they paid for.

Among other findings, the report reveals that, while 84 percent of the seafood eaten in the United States is imported, only 2% is currently inspected--and less than 0.001% is specifically inspected for fraud. In fact, recent studies have found that seafood may be mislabeled as often as 25-70% of the time for fish like red snapper, wild salmon and Atlantic cod, disguising species that are less desirable, cheaper or more readily available.

“We can track organic bananas back to packing stations on farms in Central and Latin America, yet consumers are given little to no information about one of the most popular foods in the United States – seafood,” said Dr. Michael Hirshfield, the organization's chief scientist. “With imports representing the vast majority of the seafood eaten in the United States, it’s more important than ever to know what we are eating and where, when and how it was caught.”

The report, entitled "Bait and Switch: How Seafood Fraud Hurts Our Oceans, Our Wallets and Our Health," can be downloaded as a free PDF. It explains the problems associated with seafood fraud and outlines steps you can take to know where your seafood comes from. Download "Bait and Switch."