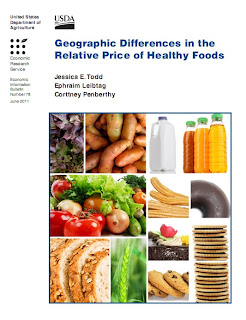 New research from the U. S. Department of Agriculture (USDA) points to an interesting geographic variation in the relative price of healthy foods, which may give some Americans “an economic incentive to consume a less healthful diet.”

The study started with seven healthy food groups. Then, using data from the Quarterly Food-at-Home Price Database, it compared prices for 100 grams of healthy groups with prices of less healthy alternatives:
What the study found

1. Some healthy foods were more expensive than less healthy foods, but in other cases, healthier options were less expensive.
2. Prices of healthy foods vary widely across the United States.
Download the entire study, “Geographic Differences in the Relative Price of Healthy Foods.”