Maybe lard's not so bad after all...? 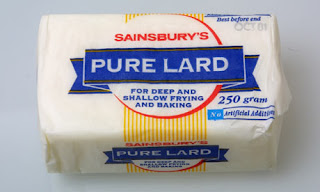 There’s been a lard conversation going on lately, one which seems to be re-thinking the artery-clogging dangers of lard (rendered pig fat). I hadn't really paid much attention until a short audio article entitled “Who Killed Lard?” was broadcast on NPR’s “Planet Money.”

Apparently there is some evidence that lard has gotten the kind of bad rap that's not entirely deserved.

A century ago, lard was used in every kitchen in America. It was the #1 cooking fat, used by everyone. But when lard fell from grace, it was a quick and steep plunge.

Author Robert Smith traces that fall from grace: “Lard didn’t just fall out of favor,” he writes. “It was pushed. It was a casualty of a battle between giant business and corporate interests.”

Smith refers to the old-time, big-money lard business as the “lard-industrial complex.” It’s an amusing, and at times fascinating, tale. You can read the audio text or listen to the audio here.