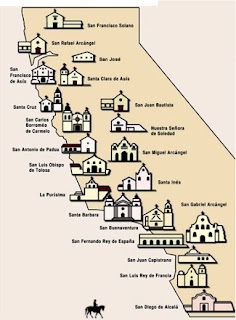 If you love visiting California's ancient missions when you travel around the state, a story I wrote this week will appeal to you. It involves a group of equestrians setting out this Sunday from the mission in Sonoma (built in 1823, it was last of the 21 missions). They'll be heading south, visiting each mission until they arrive in San Diego, where the first mission was constructed in 1769.


This weekend Sonoma has the honor of being the starting point for a unique and historic adventure, one that involves the city’s treasured Mission past.

Two long-time friends, writer Leslie Dunton-Downer and filmmaker Gwyneth Horder-Payton, are embarking on a Mission-to-Mission horseback ride. They’ll be heading in the reverse direction in which the Missions were built, leaving from Sonoma’s Mission San Francisco Solano (completed in 1823) and ultimately arriving at the earliest mission, San Diego de Alcala, which was founded in 1769 by Father Junipero Serra.