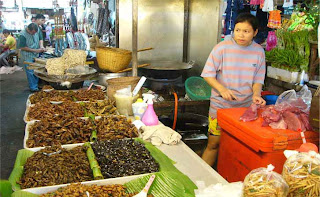 According to a new report by the United Nations’ Food & Agriculture Organization (FAO), insects already form part of the traditional diet of more than 2 billion people around the world.

The most-eaten insects globally are beetles (31%); caterpillars (18%); bees, wasps and ants (14%); and grasshoppers, locusts and crickets (13%). Many insects are protein-rich, provide good fats, and are high in calcium, iron and zinc.

Geographically, insects are eaten the most in Africa, Asia and Latin America. In Western countries, not so much. The report addresses the question of why insects aren’t popular in the First World; one reason: early, successful and widespread domestication of plants and animals.

No recipes, though. Maybe I should get busy compiling a few for a cookbook. But to do that I'd have to become a entomophagist, which seems unlikely (I still haven't stopped talking about eating fruit bat soup in Palau a few years ago). I"m always open to adventure, but bugs? That just might be too large a cultural shift.

If you're open, though, consider purchasinng The Eat-a-Bug Cookbook, Revised: 40 Ways to Cook Crickets, Grasshoppers, Ants, Water Bugs, Spiders, Centipedes, and Their Kin