Celebration: Wedding of the Century... 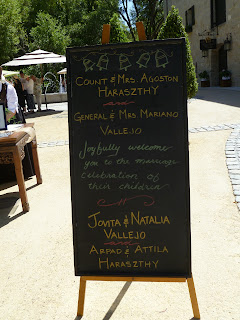 I've never been much for historic re-enactment, but after yesterday I'm revising my opinion.

I was one of about 100 guests invited to witness the recreation of an 1863 double wedding--150 years and one day after the actual event--that united two of the most powerful families in California: the Vallejos and the Haraszthys.

In case you're not up on California history, General Mariano Vallejo founded Sonoma in 1835 as a military outpost on what was then Mexico's northern frontier (many of the buildings he constructed remain in use on the town's central plaza). "Count" Agoston Haraszthy, a Hungarian nobleman, founded Sonoma's Buena Vista Winery in 1857; it was the state's first commercial winery and Haraszthy is recognized as the "father of the California wine industry."

Both Vallejo and Haraszthy were brilliant men with powerful personalities. When Haraszthy moved to Sonoma in the mid-1850s with his family, the two men hit it off. Apparently their children did as well...leading to the double wedding between Attilla Haraszthy, 28, and Natalia Vallejo, 25, as well as Arpad Haraszthy, 23 and Jovita Vallejo, 19.

Yesterday's recreation took place on the grounds of Buena Vista Winery, whose 1857 and 1863 buildings were completely renovated and retrofitted last year by the winery's new owner, Jean-Charles Boisset of Boisset Family Estates.

A lover of history, the French-born Boisset made a point of incorporating respect for the past into the winery's refurbishment. Among many innovations, one of the first things he did was to  hire a professional actor, George Webber, to dress and take on the persona of Count Haraszthy--thus serving as Buena Vista Winery's ambassador to the world. (And I do mean world; Webber, dressed in full 19th century gentleman's regalia, is always off somewhere on the planet having a great time as the Count.) 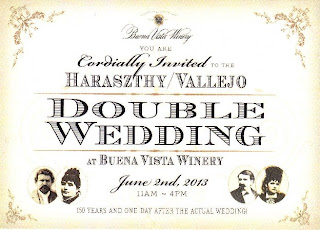 The wedding took place exactly at noon outside the 1857 winery building. The service was a short distillation of the long original, but it was historically accurate. Afterward guests made their way down the official receiving line, shaking hands with all the Vallejos and Haraszthys. And then it was into the winery building, where a magnificent feast was laid out.

Ten tables were set out in one of the big rooms; the day was hot, but inside that old stone building it was nice and cool. We marveled over the fabulous food, drank fabulous wine, laughed at champagne toasts to and by the wedding party. I was thinking that my date, Richard, and I had the great fortune to sit at a rollicking table of extroverts, but then I looked around and saw that all the tables were on fire with fun. It was just that kind of event.

After lunch we reassembled outside to cut the wedding cake and then slowly, inevitably, wandered back the pathway to 2013 and everyday life. But the glow--ah, the glow!--lingers on.

A few snaps from the day: