My day yesterday was all about America's Cup, and what a day it was. Unusually hot in San Francisco, not a cloud in the sky or a whisper of fog poking through the Golden Gate (also unusual). Really stunning weather.

My friend Lee had invited me to a three-hour morning cruise aboard USA 76, the very boat used by Oracle Racing in 2003 when competing for the America's Cup (she won 21 races in the Louis Vuitton challenger series). Eighty-four feet of carbon fiber, with a mast eleven stories high and nearly 6,000 square feet of sail, USA 76 is sleek and sexy as can be.

Sailing on such a ship is a rare and exciting experience, though it may not be for everyone. This is a racing ship: no cabins below, not even a bathroom. Bags and backpacks are stored out of the way of feet, so that nobody tips over the side and disappears into the Bay. When tacking, passengers must move from one side of the boat to the other, not always easy. You'll be perching on rails (there are no seats). But if you love sailing, this adventure is great! You're welcome to assist in the sail; I got to work the grinders for a bit, though my technique was nothing like the sailors competing for America's Cup. You can book a sail on USA 76 at their website, www.acsailingsf.com. 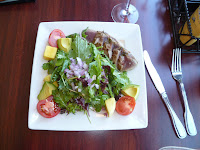 Our sail ended about noon. We docked back at Pier 39's Gate B and then strolled over to Players Sports Grill. Located in the back of the Pier 39 complex, it offers very good food and an unobstructed view of the Bay from its Luau Lounge (which has a beach-combing, tiki kind of feel). Light-as-air crab cakes, followed by seared Ahi tuna atop mixed greens, avocado and other goodies for me; Lee went with the Crab Louis. I opted for a glass of Buena Vista Pinot; he liked the Sterling Sauvignon Blanc. Excellent meal on all accounts.

And then the race started. All the TVs in the Luau Lounge sprang to life, and for a while we followed the race on the screen. Then the boats appeared outside the windows, to the west and heading in our direction. Player's windows were open to the air, and we could see those boats a-coming, getting closer and closer. They are massive and somewhat scary-looking with their towering, rigid sails.

Everybody in the Lounge was whooping and screaming; at one point I was leaning out the window shouting "Go, baby, go!" We had an incredible view--right before us--of the mark roundings. For a moment Oracle seemed to be ahead, but by the time the marks had been rounded and the boats headed back to the Golden Gate Yacht Club and the end point, Emirates had pulled ahead.

Another race was scheduled for 3:15, but the wind came up and it had to be cancelled.

If Emirates wins today, the 34th America's Cup will be over. Emirates currently has 8 wins, Oracle Team USA has 1--and the first to win 9 points takes the Cup.

If by some chance you're in San Francisco today, head over to America's Cup Village at Pier 27. Entry is free, and the excitement today will be palpable. Check out the lineup of mega-million-dollar yachts (one said to belong to a Google co-founder, and another is Larry Ellison's). And for the not-too-inflated price of a glass of wine, bottle of beer or split of Mumm's champagne, you can luxuriate like a pasha on a plush modern couch in an open-air lounge, watching the races and the world go by.

Happy sails to you...