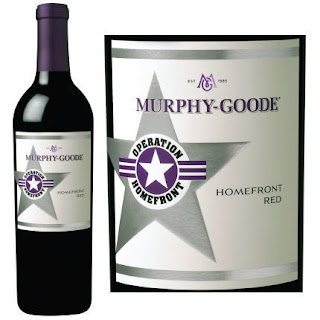 What a great idea this is…

Sonoma County’s Murphy-Goode Winery has introduced a new red blend, 2011 California Homefront Red, to help raise funds for military families and veterans in need. For every bottle sold, $.50 will be donated to Operation Homefront, a national non-profit providing emergency and financial assistance to the families of service members and wounded warriors.

That adds up: Murphy-Goode hopes to raise at least $300,000 for the organization. Since its founding in 2002, Operation Homefront has given more than $170 million dollars to programs that benefit military families. Such programs include Wounded Warrior Wives, food assistance, vision care and more.

As for the wine, it’s a food-friendly and fruit forward blend of Syrah, Merlot, Petit Sirah and Zinfandel aged in French and American Oak. You’ll be blown away by scrumptious black cherry and raspberry flavors with notes of toasted vanilla. Priced about $15/bottle.

If you buy it online from the winery through this coming Friday, September 20, you’ll receive 50-cent shipping rates on all Homefront wines (there’s also a Homefront Cab and a Homefront Cuvee, $55/each). Use the promo code HOMEFRONT when you check out.

Also, Murphy-Goode is sponsoring a contest to win a trip for two to December’s Bell Helicopter Armed Forces Bowl in Fort Worth, TX. The contest ends October 14, 2013. Visit their Facebook Page to enter.