Savory dumplings in former opium dens, chocolate delicacies, gourmet gin and gin-infused beef pies. These were just a few of the delights promised in an “Eating London Tours” brochure, which arrived in my inbox as John and I were preparing to leave for a five-week trip to the British Isles. Soho is one of London’s oldest, most diverse, and swinging areas. Combining food with history and the latest tastes of what was happening in Happening Soho piqued our interest. So we signed up for the Twilight Soho Food Tour.

Late one afternoon during our stay in London we met Joe Richardson, an actor and our knowledgeable guide for the 3 ½ hour walking tour during which we feasted and drank at six unique establishments. The first bit of information we learned from Joe was that the name “So Ho” was originally a hunting cry when a rabbit was sighted back in 1600’s, when this area of SW London belonged to a few very wealthy landowners. In later years, the area was neglected and became known for brothels, drugs and alcohol.

Not long after, bohemian writers, artists, and musicians who relished the low rents and creative camaraderie moved in. During our walking tour we saw evidence of those days as we passed former residences of Mozart, Dylan Thomas, Karl Marx, and W.B. Yeats. R.L. Stevenson set Dr. Jekyll’s home in what he describes as “the dismal quarter of Soho with its muddy ways and slatternly passengers.”

Why the rich diversity of restaurants in Soho? Joe described the vast pool of immigrants that moved into this area over the centuries from France, Italy, Greece, and elsewhere, bringing with them their varied cuisines. Following them were, of course, curious and hungry visitors and tourists like us. 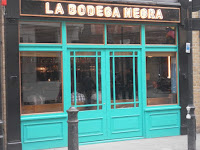 Stop #1. As we entered the storefront of La Bodega Negra, which is disguised as a strip club and adult sex shop, reveling in Soho’s notorious past, we descended into what is billed as London’s first authentic Mexican restaurant. Curiously enough, its owner is Winston Churchill’s great-grandson. They served us a variety of luscious tacos, including lamb with “drunken salsa,” char-roasted mushroom, and prawn with spicy jicama, washed down with their refreshing house margaritas.

Stop #2. The London Gin Club, a distillery and restaurant, presented us with the best gin and tonics we had ever tasted. The Club offers 270 types of gin, including some described as “botanical gin.” Perhaps healthier? There’s even a gin tasting class that uses terms such as “buttery,” “creamy,” or “orange peel essence,” rivaling the lingo of Napa Valley wine aficionados.  Accompanying our gin tastings were luscious meat pies consisting of gin-soaked, slow braised beef served in butter-enriched pastry.

Stop #3. As we arrived at Enrique Tomas, people were pressed against the front window watching an employee skillfully carve slices from an enormous pig leg. Famous in Spain, Enrique Tomas’ family-run business has arrived in Soho, featuring Jamón-tasting of meat from pampered Iberian pigs that are raised on acorns and special diets. The meat is meticulously cured for thirty-six months. Some of it sells for 300 British pounds per kilo, and an entire leg can cost 950 pounds.


Stop #4. Pix Bar is inspired by the pintxo bars of Basque Country bars in Barcelona and San Sebastian. As throughout our food tour, gracious hosts offered us copious and varied samples of their wares. At Pix, before us were counters laden with Basque snacks, or miniature tapas on wooden sticks, which we enjoyed, lubricated with their Txakoli wine.

Stop #5. We slipped just over the edge of Soho to Chinatown’s one square mile of delectable dim sum and a multitude of Chinese teas at Opium. As we climbed the narrow staircases upon entering, we felt as if we were entering an Oriental opium den. This was likely true, as opium dens galore nestled in this area in the 1800s. Both cocktail bar and restaurant, Opium consists of a labyrinth of small rooms, each with its own mixologist and unique menu. Testifying to Soho’s earlier incarnation as a theme park of brothels, Opium—like many bars, restaurants, and even private homes in Soho today—posts a sign on its door that says: “This is not a brothel. There are no prostitutes at this address.”

Stop #6. Just when we all felt that we had no more room for food or drink delights, Joe Richardson, our enthusiastic guide, ushered us to our final tasting at Said Chocolate. An import from Rome, Said is said to be one of London’s favorite dessert spots. We enjoyed their uniquely spiced hot chocolate—so thick it is best eaten with a spoon—and their amazing tiramisu.

Walking along Soho’s narrow alleys, we passed Trident Studios where the Beatles, Elton John, and David Bowie recorded. Nearby is a prominent jazz club, Ronnie Scotts’ Jazz Bar, which has been going strong since 1959 and has hosted Ella Fitzgerald, Prince, and Wynton Marsalis, as well as Jimi Hendrix’s last public performance in 1970. We promised ourselves to come back another night.

As we said our goodbyes to our small group and thank you to Joe, our terrific guide, London felt like a very different city to us. We felt closer to the many immigrants who had made their homes here, the many talented people who enriched our lives and palates.